When soloists unite, bringing their talents to an exciting repertoire with an acclaimed violinist as front-man, fireworks ignite. This exciting new ensemble, International Chamber Soloists with violinist Dmitri Berlinsky, is acclaimed for its interpretative skill and its on-stage pyrotechnics.

“To be sure, he’s an impressive violinist, with a dazzling technique and a strong, rich tone. In his role as the “alpha male” of the orchestra, he communicated his intentions clearly and emphatically to his players. Their response was no less clear: Phrasing and dynamics mirrored Berlinsky’s in a fine show of stylistic unity.”

This unique group of extraordinary young string players hail from literally the world over. Comprised of young, award-winning musicians from the U.S., Russia, Poland, Belarus, Romania, Korea, Taiwan, New Zealand, Australia and Uzbekistan, they are united through their love of and dedication to music.

Recent engagements include performances on both coasts (including festivals in New York and a debut in Los Angeles), a Canadian debut (Toronto and Barrie, Ontario), appearances in Florida, Maryland, Virginia, Washington, DC, Kansas, Michigan, and a tour of Colorado, Iowa, Minnesota, New Mexico, Nebraska, North Dakota, South Dakota and Wisconsin.

Attracting the highest caliber instrumentalists from around the world, Dmitri Berlinsky has created a superb ensemble of dynamic and fiercely talented musicians. Just after its formation, the International Chamber Soloists opened the 15th International Credomatic Music Festival in San José, Costa Rica, made an appearance at the Fontana Chamber Arts Festival, and performances in such distinguished venues as the Wharton Center and the San Francisco Conservatory.

Through his international travels as soloist with major orchestras in US, Europe, Latin America, Asia and Australia, it was Dmitri Berlinsky’s dream to find an environment in which to establish a chamber orchestra where his colleague-friends could find inspiration and realize the joy of playing together. And with their support he would be able to achieve his highest artistic vision as a violin soloist.

A new CD including the Piazzolla Seasons is scheduled for imminent release.

“In the best of today’s chamber orchestras, there’s no room for wimpy playing: These ensembles are muscular, agile, flexible and out to make an impression. That’s a pretty good description of the International Chamber Soloists”
Toronto Globe & Mail

“The string ensemble produced a pure and velvet-soft sound and the integration with the soloist was smooth at all times.”
La Nacion, Costa Rica

“Berlinsky accomplished that to the highest degree with ICS, and their performance Tuesday night was clearly one of the best classical concerts given at Memorial Auditorium in recent memory.”
The Hawkeye

“Berlinsky displayed complete technical mastery. He played the Beethoven Concerto with elegance of style and phrasing…”
The Strad

“Berlinsky led off playing J. S. Bach’s famed Violin Concerto No. 1 in A minor, BWV 1041, surrounded by the 11-person International Chamber Soloists of which he is music director. The resulting glorious sound hinted that Bach’s writings, many composed for religious venues, miraculously accommodated the resonating acoustics found in most churches like St. Luke’s. That factor proved welcome.
Berlinsky’s tone was secure, sweet and uniquely his own, partly resulting from his exquisite bowing. The second Andante movement featured bittersweet playing, soft as a musical whisper, while Berlinsky’s talented ensemble offered solid support. One’s respect for Bach, as well as for the fine players, rose upon hearing controlled passion so ably conveyed.”
Kalamazoo Gazette

“The Mendelssohn brought about the welcome appearance of the Russian (and now American-based) Dmitri Berlinsky,… A superbly equipped player, with a rock-steady bow arm and ultra-confident technique, he sailed through the 13-year-old Mendelssohn’s precocious essay in concerto writing with serene self-confidence”
The Toronto Star

“Dmitri Berlinsky possesses an impeccable bowing technique which achieves a captivating sweetness throughout the breadth of the entire register…”
Le Nacion, Buenos Aires

“His tone was rounded and velvety, and he phrased in a way that brought out the music’s fire.”
The New York Times 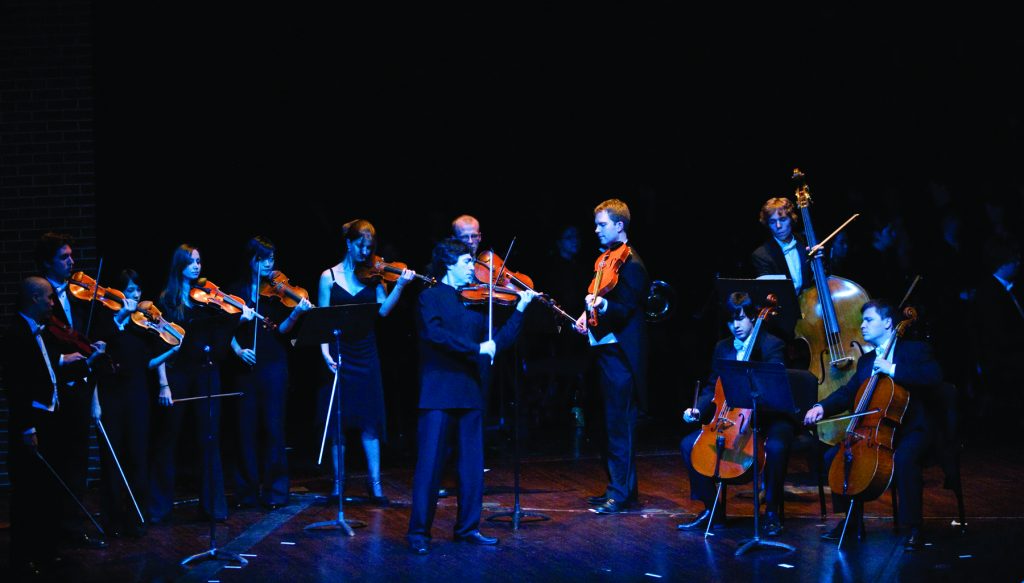