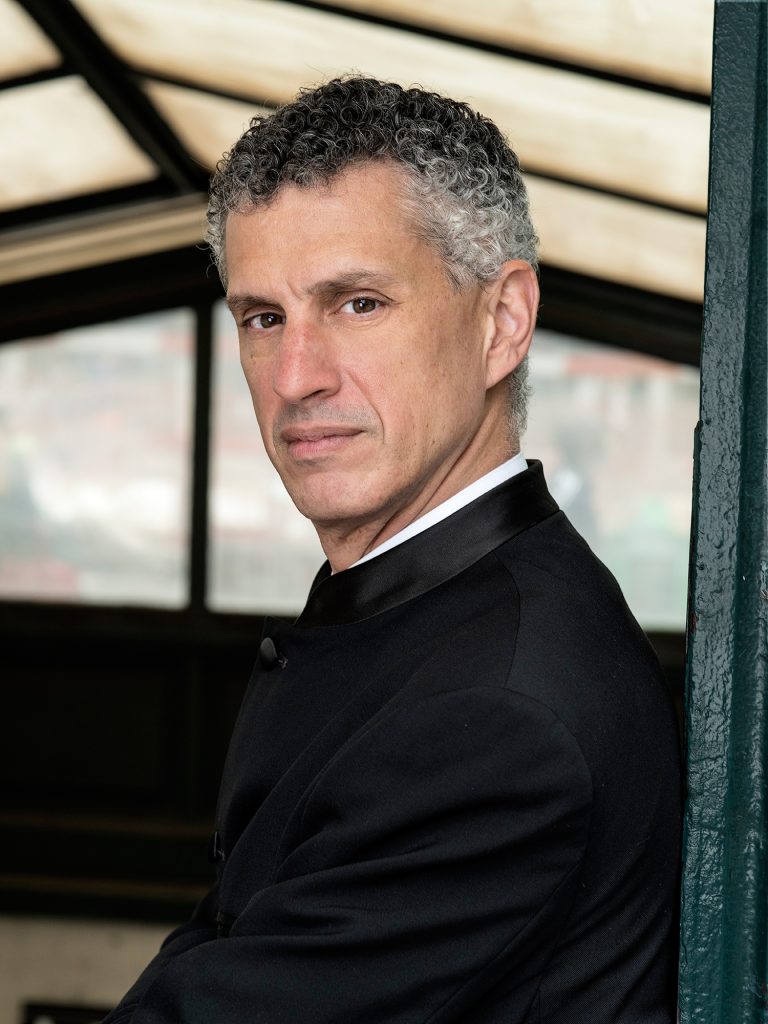 Acclaimed conductor Robert Franz, recognized as “an outstanding musician with profound intelligence,” has held to three principles throughout his career; a commitment to the highest artistic standards, to creating alliances and building bridges in each community he serves, and a dedication to being a strong force in music education. As Music Director of the Windsor Symphony, Artistic Director of the Boise Baroque Orchestra, and through an extensive tenure as Associate Conductor of the Houston Symphony, he has achieved success through his focus on each of these values.

In his eighth season as Music Director with the Windsor Symphony Orchestra, Franz was recognized by The Windsor Endowment for the Arts with its Arts Leadership Award. His work to grow a vibrant local arts community is evident by the partnerships he’s developed and fostered throughout the community as well as his versatility in programming. Highlights of the 2019/2020 season include a presentation of Madama Butterfly in concert featuring an all Canadian cast and Canadian composer Tobin Stokes’ Symphony No. 3 ‘The Piper.’ Recent collaborations include the Windsor International Film Festival, Art Gallery of Windsor, Canadian Historical Aviation Association, Windsor Public Library, and the University of Windsor. In 2017 he led the first bi-annual Conductor’s Guild Workshop with the Windsor Symphony Orchestra to train conductors in the art of creating and presenting effective student concerts. Through his work the WSO has become a cultural hub for a wide variety of artists in multiple genres and disciplines.

Driven to constantly develop artistically and expand his repertoire, Franz enters his second season as Artistic Director of the Boise Baroque Orchestra where historically informed performances are the driving force behind this new endeavor. Collaborations with Opera Idaho in a semi-staged performance of Handel’s Acis and Galatea featuring Grammy Award winning tenor, Karim Sulayman, the Boise High School Chamber Orchestra and the Boise Philharmonic Master Chorale in a program of music by Haydn and Bach are key to broadening the footprint of this ensemble’s vital work in the community. Under his leadership, the orchestra will undertake its first ever commercial recording project of Classical Oboe Concerti for Centaur Records featuring rising star oboist Bhavani Kotha.

This season Franz celebrates his 13th year as Associate Conductor of the Houston Symphony where he was recently honored as the first member of the orchestra conducting staff with the Raphael Fliegel Award for Visionary Leadership. It was presented to him in recognition of his immense success in advancing the organization’s education and community engagement activities. A tireless ambassador for music education, he has positively impacted student concert attendance during his tenure and has led the Symphony in a broad range of creative, education and engaging family concerts including its summer neighborhood concert series and outreach programs dedicated to bringing music to all of Houston’s communities.

Franz is committed to mentoring the next generation of conductors. His annual Art of Conducting workshop at the Fairbanks Summer Arts Festival, has resulted in numerous practicing conductors from across North America deepen their awareness of their craft. Franz was honored to bring the orchestra to Denali National Park and Preserve for a performance that marked the first time an orchestra had performed there.

As Founder and Music Director of the Idaho Orchestra Institute, now in its fourth year, Franz takes young musicians on an exploration of major orchestral repertoire in a program that explores the complete musician.

Committed to music education for students of all ages, Franz maintains a comprehensive schedule of concerts and events each season that delivers on his passion for sharing live music. Developing a deeper connection with music making is at the center of his work with young musicians. His work with the acclaimed Bolton Research Project led the way to developing his commitment to the art of active listening. Under his direction, both the Buffalo Philharmonic Orchestra, where he received the BPO/ECMEA Music Award for Excellence and the Louisville Orchestra were awarded ASCAP’s Leonard Bernstein Award for Educational Programming. Franz has also created highly respected arts education programs for the Carolina Chamber Symphony, Buffalo Philharmonic, West End Chamber Ensemble, the Winston-Salem Piedmont Triad Symphony, and the Louisville Orchestra. The Louisville Orchestra’s award led to the creation of an education program for Kentucky Educational Television entitled Creating Music and Stories.

An eloquent speaker, Franz recently presented a TedX Talk entitled Active Listening and Our Perception of Time. The Idaho Legislature recognized his expertise when he was invited to speak to their education committee, and he spoke on broadening audiences through new music opportunities to the League of American Orchestra’s conference. While in Louisville, he co-hosted In a Different Key, a weekly contemporary classical music radio program on WUOL.

In addition to his current posts, Franz served as Music Director of the Boise Philharmonic from 2008-2016, and the Mansfield Symphony (OH) from 2003-2010. He has held staff positions with orchestras in Buffalo, Louisville, and Winston-Salem, as well as led youth orchestras in Louisville and Winston-Salem. He is Music Director Emeritus of the Carolina Chamber Symphony, an orchestra he founded. Franz has participated in a number of conducting workshops in the Czech Republic, St. Petersburg (Russia), Nashville, the Festival at Sandpoint and was a participant in the Bruno Walter National Conductor Preview.

When not on the podium he can be found on the slopes, skiing slowly and carefully, stretching in a yoga class, and non-competitively trying his hardest to win at a game of cards with his family.

“The presentation had all the right stuff…. As for Rachmaninoff’s “Symphonic Dances,” Franz’s account of it proved beguiling in so many ways. He summoned a big, rich sound from the strings. He inspired an angelic sound from the winds and brass. He exacted precise playing while never neglecting the more lyrical aspects of what can be extremely lyrical music.”
Winston-Salem Journal (full review… )

“Franz is an outstanding musician with profound intelligence.” “Franz rose to the occasion, guiding the huge forces through the three movements to the inexorable ending involving the “Dies Irae” (Day of Wrath) theme so dear to Rachmaninoff… this was a remarkable performance of a too-seldom-heard masterpiece.” [Rachmaninoff Symphonic Dances]
Classical Voice North Carolina   (full review…)

“Friday’s audience was fortunate beyond belief to have heard the definitive performance of the Bruch Concerto No. 1 (Joshua Bell), which was superbly partnered by conductor Robert Franz and the BPO.”
Buffalo News

“The orchestra has seldom played with such rapt attention to its collective tasks. Franz conducted the entire affair with masterly pace, emphasis and technical control. The final minute was among the most viscerally thrilling indulgences I’ve heard in Whitney Hall.”
The Courier-Journal (Louisville, KY)

“Franz’ assured musicality gave his readings a vitality that made the evening a fine musical adventure.”
Spokesman Review

“The music (Barber’s Medea’s Meditation and Dance of Vengeance) crackles, communicating the essence of the Greek tragedy with terse power. So too did Franz’s reading, which matched the composer’s own remarkable intensity.”
The Courier-Journal (Louisville, KY)

“Franz and company closed with a reading of the Schubert Symphony No. 5. Tempos pressed forward in a way that with this nimble band, felt blithe and refreshing.”
The Charlotte Observer

“The Carolina Chamber Symphony fills a void in Winston-Salem’s concert life. Especially since the group is filled with such able, energetic players and is led by so efficient and intelligent a conductor.”
The Winston-Salem Journal

“Robert Franz is a JOY to work with! He’s extremely competent. He takes matters like preparation, musical rehearsals and performances very seriously without being oppressive. He is all at once smart, fun, careful, relaxed, but demanding of his musicians. I love working with him!”
Sylvia McNair

“I must say that I was deeply impressed with [Robert’s] work, not only by his solid rehearsal techniques and fine-tuned ears, but also by his extremely musical and passionate approach toward music making.”
Bright Sheng

“Thank you for your excellently prepared and insightful performance of my Third Symphony last week.”
John Harbison

“I was very positively impressed with Mr. Franz’s commitment to communicating and educating audiences of all ages, and with his love of contemporary music… His fine conducting and the enthusiasm he conveys are certain to make a substantial difference in the musical life of any community in which he works.”
Aaron Jay Kernis

“His genuine musical gifts, intelligence, and down-to-earth approach to reaching audiences of all ages make him certainly of the most talented conductors of his generation.”
Michael Daugherty

“It is truly exciting to come across someone with your sense of vision. I think your educational initiatives with the New Dimensions series and its numerous ancillary activities are turning Louisville into a stellar example of the role an orchestra can play in engaging a community in truly meaningful ways.”
Shulamit Ran

“He has a natural and highly developed ability to present the widest range of orchestral repertoire with integrity and insight. Musicians respond to his artistic command and personal style on the podium with respect and loyalty.”
Russell Peck 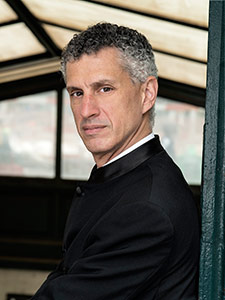