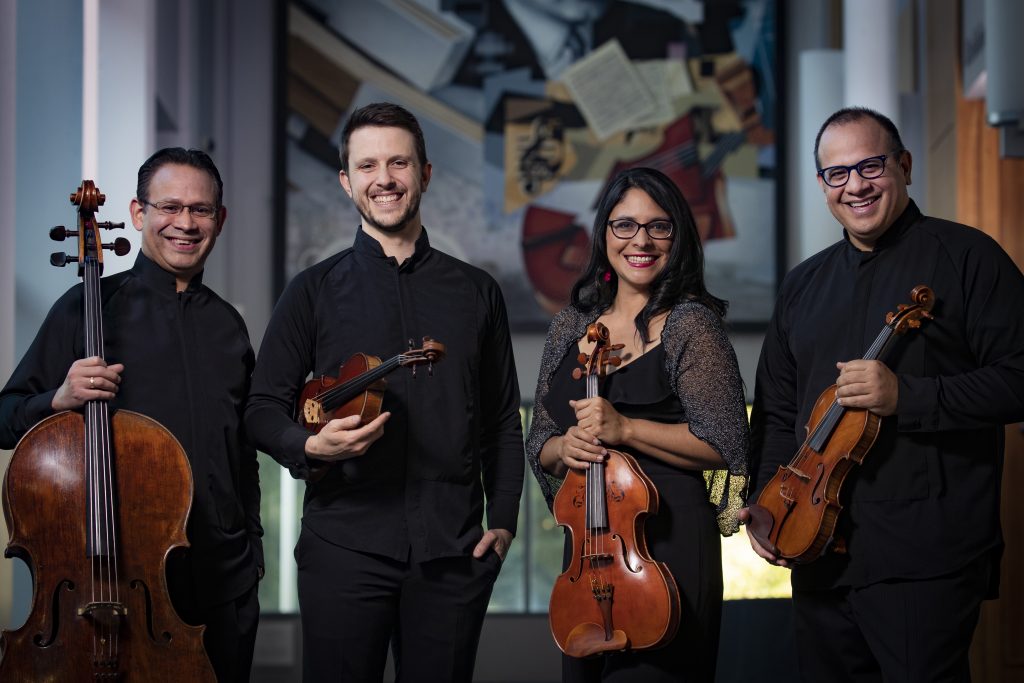 The Dalí Quartet is acclaimed for bringing Latin America quartet repertoire to an equal standing alongside the Classical and Romantic canon. Tours of its Classical Roots, Latin Soul programming have reached enthusiastic audiences across the U.S., Canada and South America. Its fresh approach has been sought out by distinguished series in New York, Toronto, Philadelphia, Washington DC, Los Angeles, San Diego, San Jose, Seattle, San Juan and countless communities beyond. The quartet has been called upon for return engagements at the National Gallery of Art, Friends of Chamber Music in Portland, and Chamber Music at Beall, among others. The Dalí has recently recorded the Weber Clarinet Quintet with Ricardo Morales, famed principal clarinetist of The Philadelphia Orchestra.  The quartet enjoys an ongoing performance collaboration with Van Cliburn Gold Medal-winning pianist Olga Kern, with whom they have toured from coast to coast and recorded the piano quintets of Brahms and Shostakovich for imminent release on the Delos label.

The 2019 recipient of the Atlanta Symphony’s esteemed Aspire Award for accomplished African American and Latino Musicians, the Dalí Quartet founded the much admired Dalí Quartet International Music Festival in 2004 which develops the performance skills of musicians through semi-professional level. Currently Quartet in Residence at West Chester University, the Dalí has also served as a resident ensemble at Lehigh University and given mini residencies at countless colleges and universities in the U.S. and Canada.

Trained by world-renowned artists, members of the Dalí Quartet are from Venezuela, Puerto Rico and the US, and have studied at esteemed institutions such as the Cleveland Institute of Music, Indiana University Bloomington, the New England Conservatory, Juilliard and the Simón Bolivar Conservatory in Caracas, Venezuela. The quartet is based in Philadelphia, PA.

Dalí Quartet & Olga Kern to the 2019 Virginia Arts Festival, will record
The Dalí Quartet and Van Cliburn gold-medal-winning pianist Olga Kern will join forces to perform and record during the Virginia Arts Festival in May 2019. Olga Kern is the festival’s new Director of Chamber Music and the Dalí will spend a week giving performances, educational outreach, and joining Ms. Kern for recordings of both the Brahms and the Shostakovich Piano Quintets. The five artists have just returned from their western US/Canadian fall tour, including appearances at the Soka Performing Arts Center, the University of Oregon Chamber Music@Beall series and at Chamber Music Kelowna – which wrote to us “We had almost a full house, despite Cirque du Soleil performing next door and another concert in our bigger theatre at the same time. Our audiences loved the artists! The outreach also made it clear that the Quartet makes the audience comfortable and gets a warm welcome in return. And Olga was a perfect addition to the program. Thank you for making all of this happen!” The next quintet concerts are in April in Overland Park and Manhattan, Kansas.

The Dalí Quartet brought the excitement of its signature mix of Latin American and European classical and romantic music to the WRTI 90.1 Performance Studio. Listen…

WHYY-TV features the Dalí Quartet on Friday Arts, a regular program on the Philadelphia PBS station’s commitment to the arts. Hear the quartet perform and talk about its varied repertoire and its work with youth at the Dali Quartet International Music Festival. The program, titled “The Dalí Quartet: Classical Roots, Latin Souls” was produced by Karen Smyles and is available here.

“Together, theirs was an eager, thunderous performance. Excellent communication gave the roles clarity. Brahms wrote lovingly for each voice and positioned them together in fascinating ways, the musicians leaning into these voicings with excellent results.” [Pianist Olga Kern with the Dalí Quartet] KC Studio

“Each piece was livelier and more uninhibited than the last, as the quartet sunk deeper and with obviously greater pleasure into its dance-band persona, with instruments turned on their sides and strummed like guitars and ratchet percussion imitated by bowing below the bridge.”
San Francisco Classical Voice

The Dalí Quartet gave a beautifully judged performance … They gave the music time to breath; and while each player made the most of the solo turns Mozart gave them, they balanced and blended well as an ensemble.”
Classical Voice North Carolina (CVNC.org)

“this performance delivered with excellence of expression and ensemble.”
Peninsula Reviews

“Villa-Lobos is conscientious about spreading his solos around, giving plenty of melodic leads to the deep, rich viola of Adriana Linares and the crisp, vigorous cello of Jesús Morales.”
San Francisco Classical Voice

“forged a near-instant rapport with the audience… In no time, the 300-plus audience members were on their feet”
Killeen Daily Herald

…a remarkable ensemble; it’s a true crossover group in the best sense of the word. Made up entirely of Hispanic musicians who are proud of their roots, they bring together the best music by Latin American and European composers. The result is a rare treat for everyone… a spectacular performance of works by the Brazilian Heitor Villa-Lobos and the German Felix Mendelssohn. They also threw three shorter pieces by two other 20th century Latin American composers into the mix that turned this program into an evening of musical magic.”
ReichelRecommends.com

“Dalí has a big, lush sound. They captured the elegance and lightness of the Haydn quartet and did not have any difficulty in switching to the dissonant drama of one of Beethoven’s most stormy chamber music works. As expected, they handled the Latin American music with authoritative ease.
The Morning Call

“The Dali is known for its emphasis on Latin music, and the playbill was filled with works from south of the border…a strong appearance…gathering heavy applause at the end of the first half…This great effort brought Meadowlark patrons to their feet with approving cheers and whistles.”
Lincoln Journal Star

“The deep, plush sound of the viola and cello supported a gorgeous, singing first violin melody in the second movement. Their playing of the third movement brought out its sparkling quality as well as the special tone generated by canonic writing. The Dalí players made the most of the vivid rhythm of the czardas dance Brahms used in the finale.”
CVNC.org

“four young players – one originally from Cuba and the others from Venezuela….The program they performed would have challenged any ensemble: Turina’s “La oracion del torero”, the Quartet in E-flat Major, K. 428 by Mozart; Shostakovich’s Quartet No. 8 in C Minor, Op. 110, and Piazzolla’s “Four, for Tango.
“The quartet already has achieved a rich, highly integrated and balanced sound. …their playing exhibited a high level of technical competence and musical understanding…”
The Morning Call

“They were wonderful! Not only were the members of the Dali Quartet excellent musicians, they were a delight to work with. Friendly, unassuming, and extremely talented.”
Joan Gillner, Wildflower Music Festival

Virginia Gazette “What the Ginastera showcased was its remarkable technical abilities. The work is difficult and challenges its players in major ways. The quartet handled the gymnastics of the piece and delivered a high grade, absolutely stimulating rendering of it.”

Virginia Gazette – with pianist Olga Kern “The Dali and Kern team offered a stellar, captivating performance that allowed the Schumann to take on more of a symphonic feel than an ordinary piano quintet. They offered a big sound and big rewards in coordinated, extremely artistic, and panoramic sounds that brought the crowd to its feet in spontaneous applause.”

KC Studio “Villa-Lobos used playful slides, a fascinating array of timbres, and energies casting from frenzied to laconic, themes pulled from popular Brazilian melodies. I especially savored the way Rubio connected with his cohorts, coming in under a phase and letting it blossom; Salerni’s wild, almost operatic approach; Linares’ forthwith tone and melodic subtly; as well as Morales’ commanding air of a hard rock bassist.”

KC Studio  – “Together, theirs was an eager, thunderous performance. Excellent communication gave the roles clarity. Brahms wrote lovingly for each voice and positioned them together in fascinating ways, the musicians leaning into these voicings with excellent results.”
[with pianist Olga Kern]

Killeen Daily Herald    “a near-instant rapport with the audience”

Symphony Magazine  “the only high-school string program within the 10,000 student district” 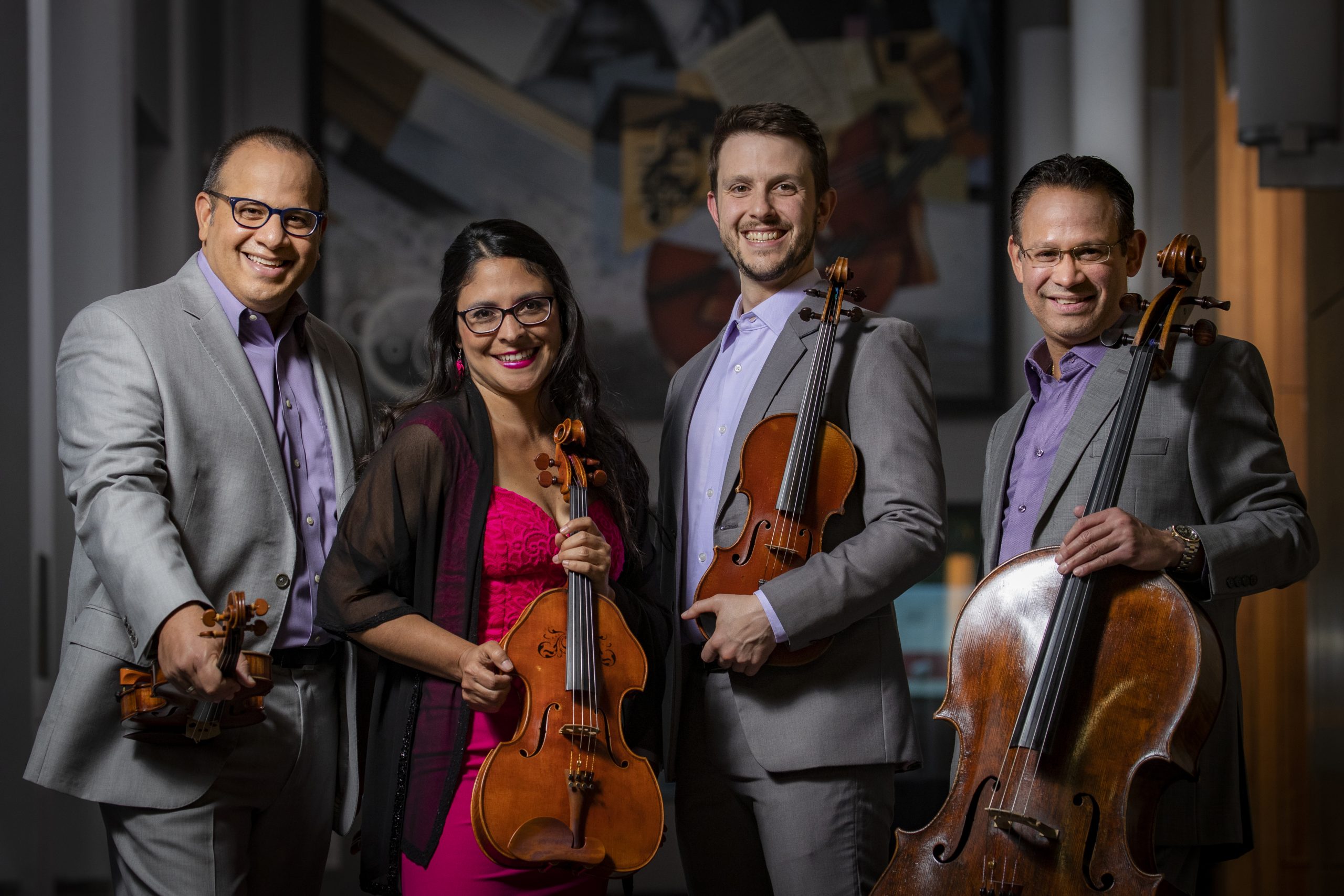 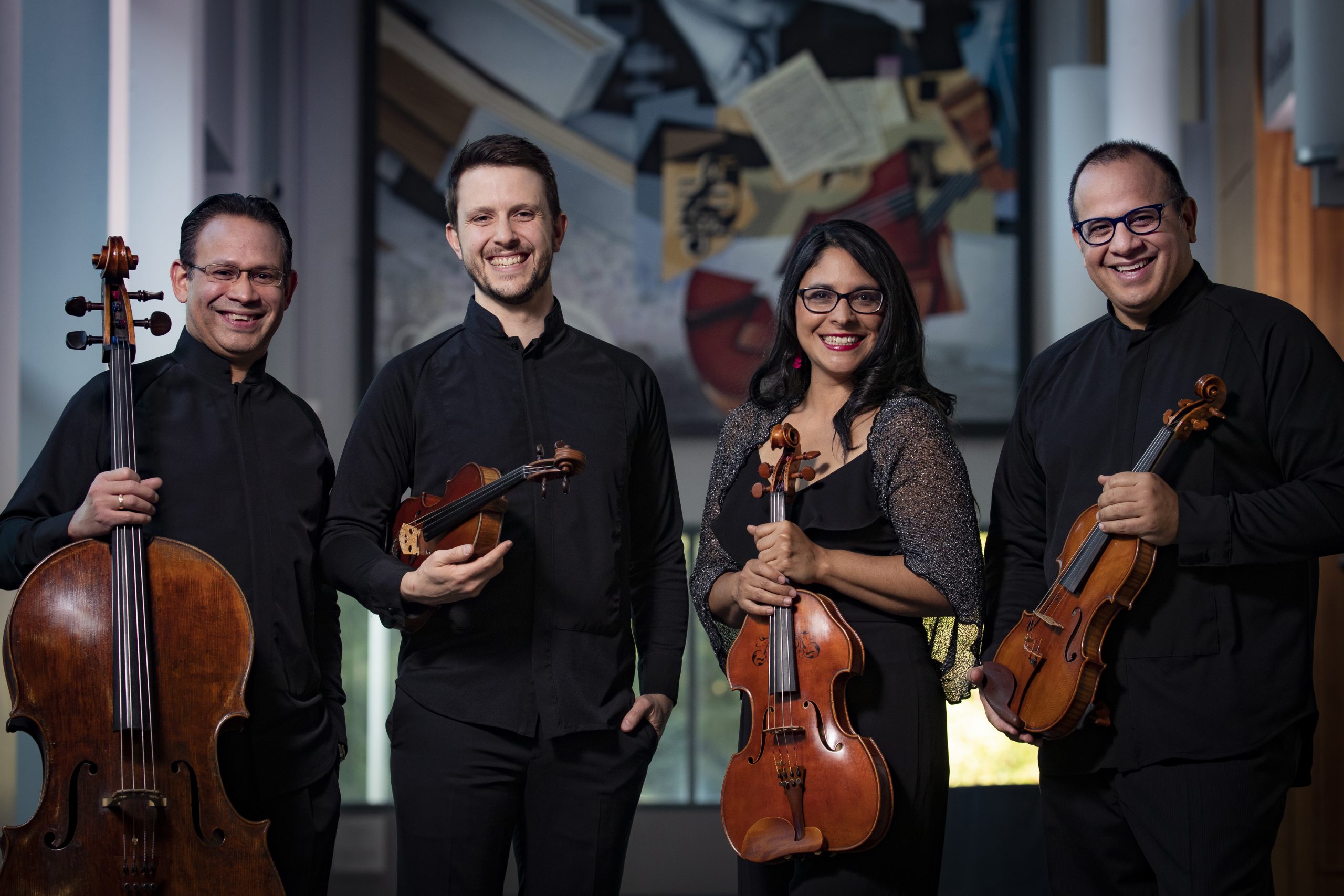 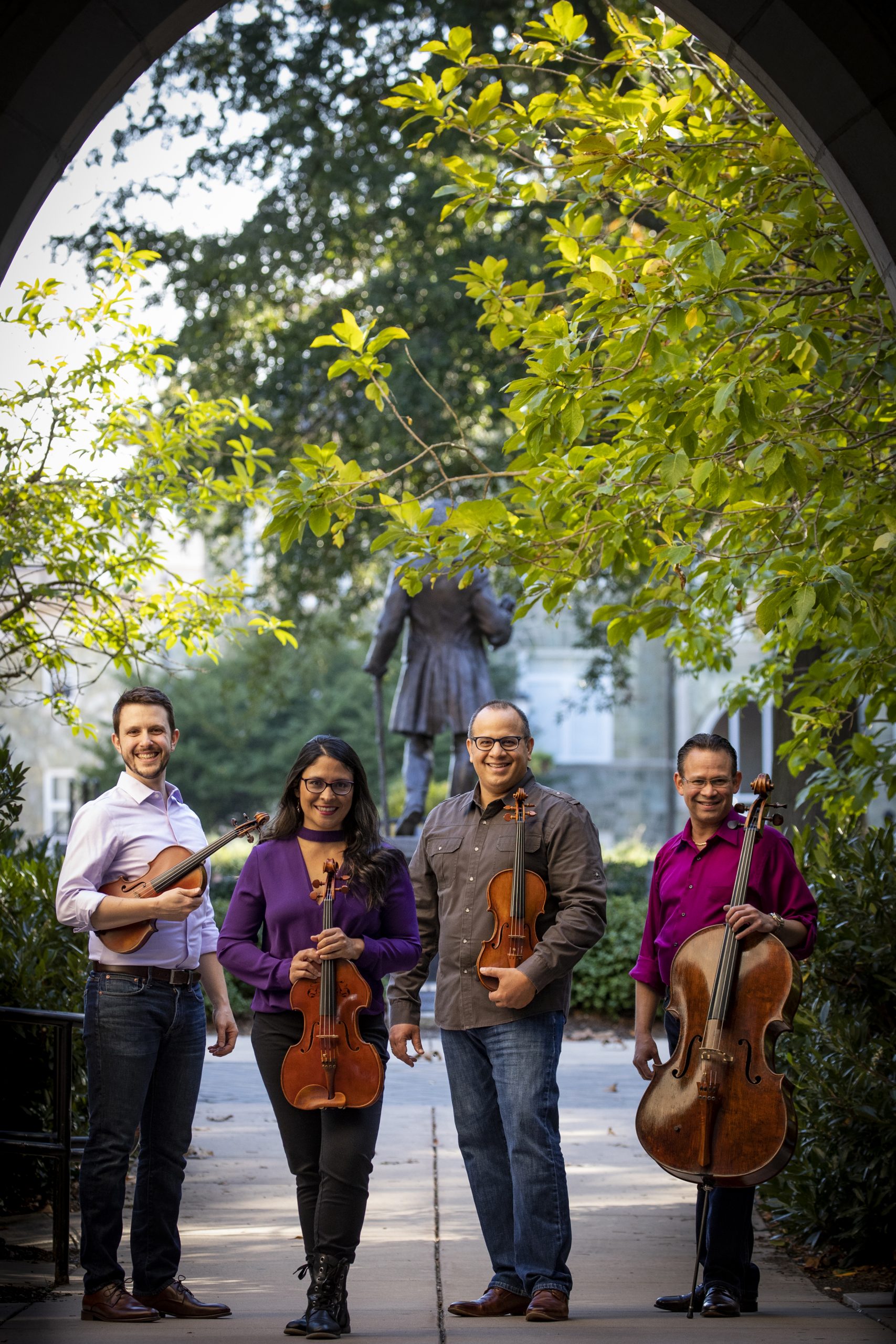 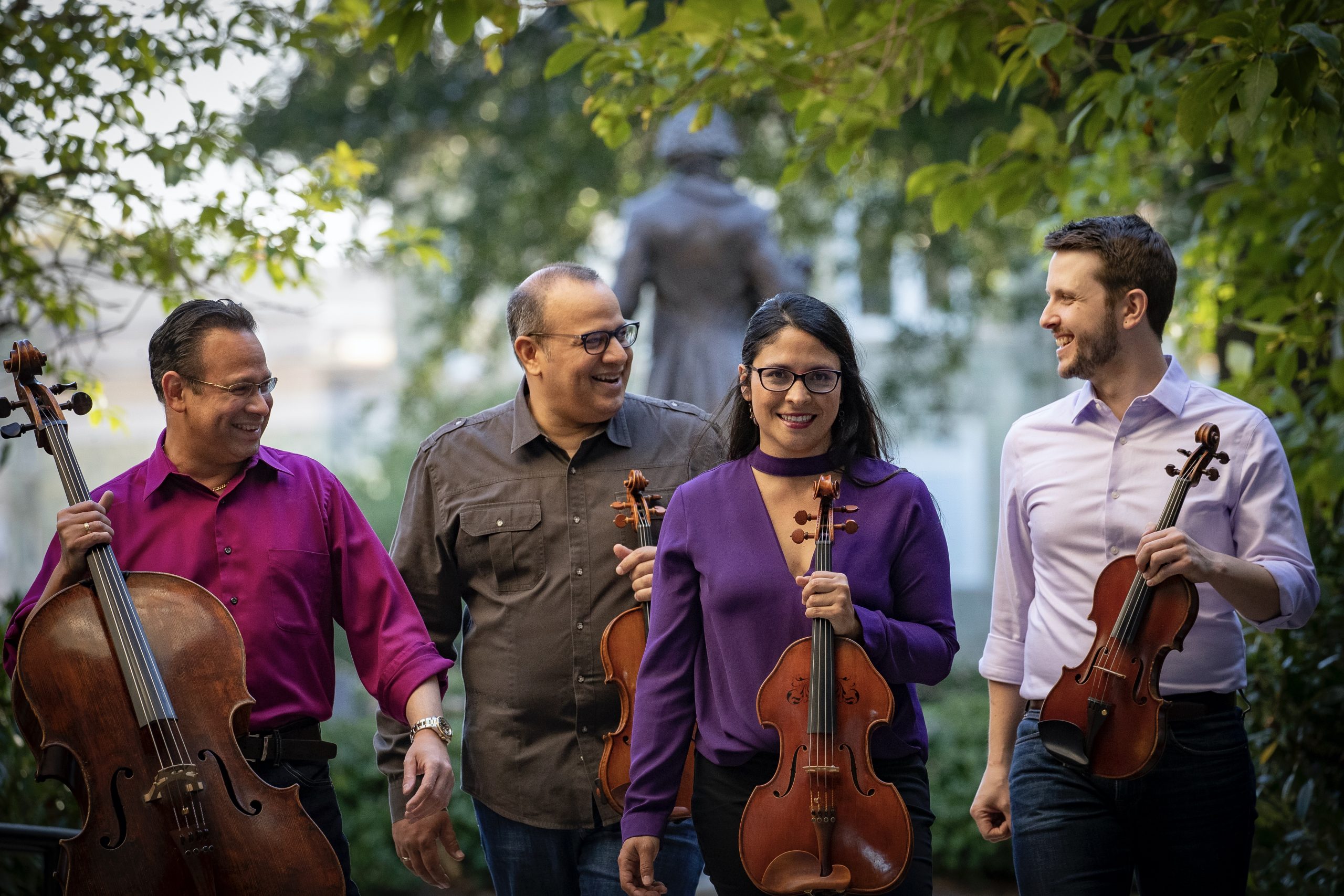 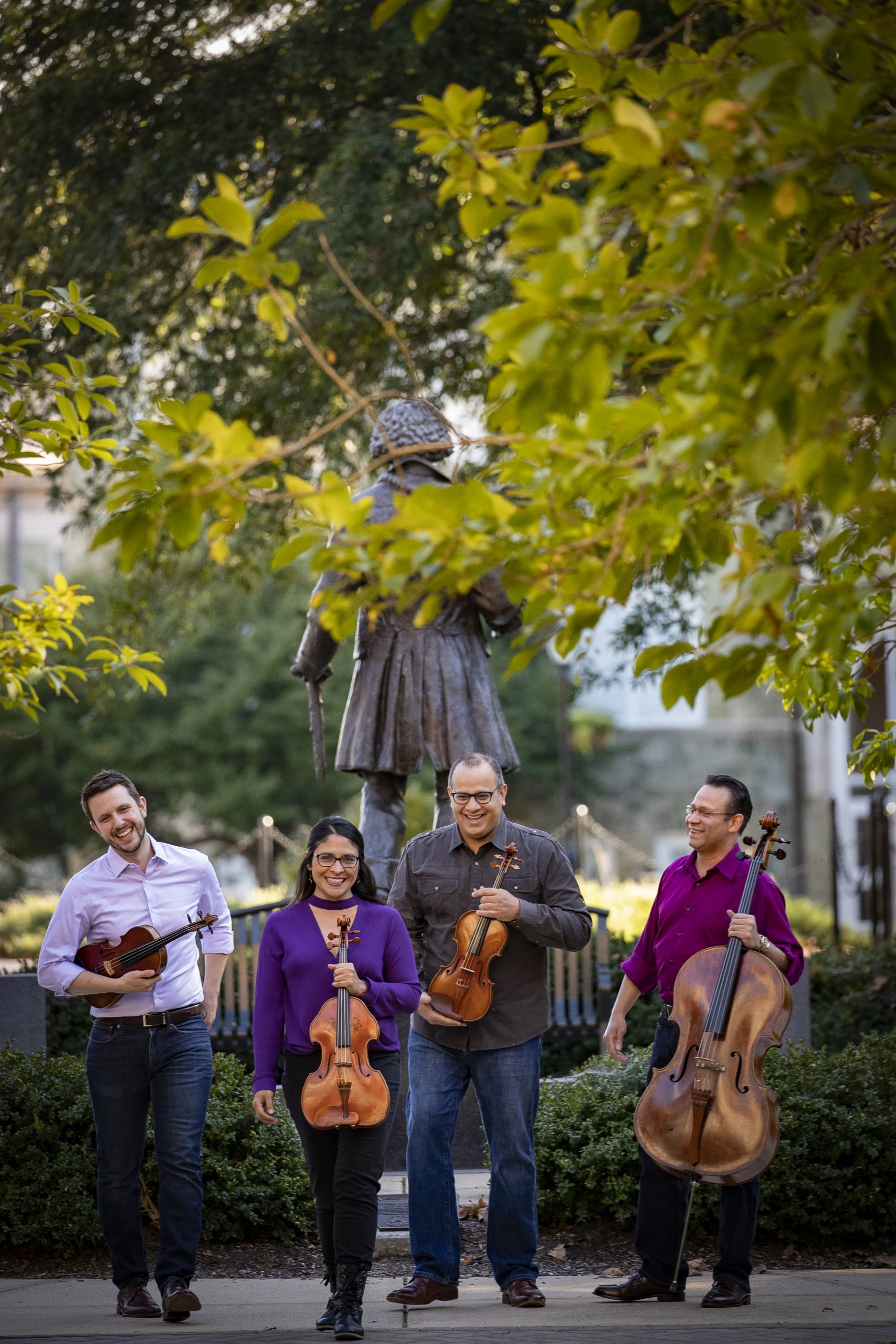 The Dalí Quartet’s programs include these collaborations:

The Dalí Quartet offers inventive, imaginative and intelligent community outreach and educational programming. The quartet has designed successful programs for colleges and universities, for performing arts centers, arts councils, chamber music societies and symphonies. The group has created engaging programming for the Kennedy Center’s Any Given Child program in collaboration with the Tulsa Public School System and Chamber Music Tulsa that has reached Tulsa’s entire fourth grade for three years. Sample educational programming options are at this link. In addition to serving as Quartet in Residence at West Chester University, the quartet has been Ulrich Artists-In-Residence at Lehigh University, and serves as IRIS Orchestra Resident Ensemble. The group’s chamber music and orchestral summer program, the Dali Quartet International Music Festival is a hugely successful performing and teaching festival reaching hundreds of junior, youth and pre-college level participants, now entering its second decade. “The [Dalí] Quartet was truly amazing. Along with being generous, outgoing individuals, they delighted our audiences with their exemplary talent and energy. The Quartet put together both educational concerts for our young audiences and collaborated with conductor Ricardo Lorenz and marimba soloist Orlando Cotto to offer original and breathtaking experiences for our most sophisticated patrons. I would be thrilled to work with the Dali String Quartet anytime again in the future and highly recommend them as performers and people.” – Tamara Cass, Executive Director, Meadowlark Music Festival “They can use Latin American tangos to engage with audiences of varying ethnic backgrounds and then later connect them to the traditional quartet repertoire with an equally entertaining performance of a Mozart string quartet.” – Jeri Lynn Johnson, Music Director, Black Pearl Chamber Orchestra “The key to their success is that the musicians sense the nature of the audience first and then craft a program to meet the specific needs and abilities of that audience. When I have a spot to fill in a school visit, I always look to the Dalí Quartet musicians first, because I know they will always be dynamic, engaging, and fabulous!” – Alice Anne Schwab, Director of Education, Harrisburg Symphony Orchestra “The Dalí Quartet has a passion for music and a passion for people. They have delighted audiences and are inspiring the next generation to discover the joy and power of music.” – Steven Tenenbom, Violist, Orion Quartet; Faculty, Juilliard School of Music, Curtis Institute of Music Full Information Recent Review