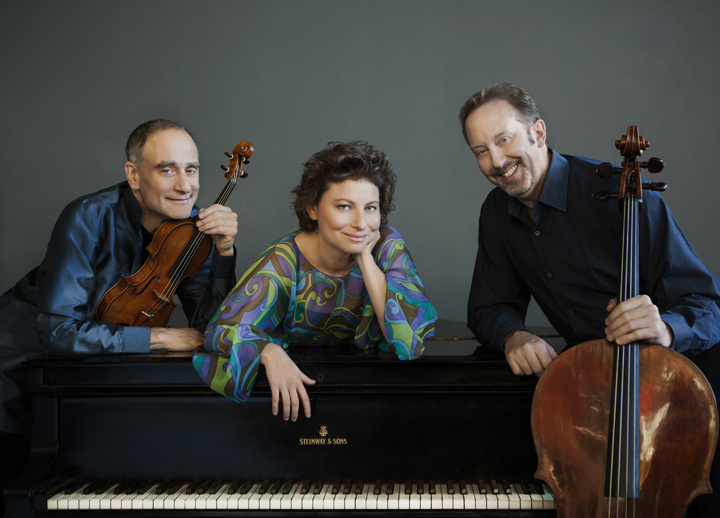 Combining the talents of three award-winning soloists, the Weiss-Kaplan-Stumpf Trio brings to each performance its distinctive fusion of authority and experience, energy, and passion. These three musicians comprise an ensemble that embraces the music of the future while offering fresh insights into three centuries of masterworks.

Hailed by The New York Times as “Three strong voices, locked in sequence,” the Trio was originally founded in 2001, and was joined in 2014 by the distinguished cellist Peter Stumpf. The Trio has presented concerts throughout the US, Europe and the Middle East and will make its debut in Asia with a Korean tour in 2018. The ensemble has been engaged by distinguished series at The Kennedy Center, Wigmore Hall, Baltimore’s Shriver Hall, Princeton, UCLA, Indiana and Oxford Universities, Tel-Aviv Museum, and for the Chamber Music Societies of Edinburgh, Santander, Pasadena, Phoenix, Cincinnati, Salt Lake City, Tucson and Memphis, among others.

The Weiss-Kaplan-Stumpf Trio is frequently engaged to appear as soloists in Beethoven’s Triple Concerto with orchestras such as the Prague Chamber Orchestra, Santa Fe Symphony Orchestra, Bloomington Camerata, New Bedford Symphony and Sioux City Symphony. A performance of the Triple Concerto at the Prague Festival was praised for its “rare timbral refinement, nobility and virtuosic brilliance…among the brightest moments of this year’s Festival” (Lidove noviny, Prague). Other international festival performances have included appearances at the Jeju Island Music Festival in Korea and the Festival of the Sound in Canada.

The group is committed to new music, and has commissioned many works, including Lera Auerbach’s “Triptych: The Mirror With Three Faces”, Clancy Newman’s “Juxt-Opposition”, and “Variations on a Poem” by Michael Hersch. The trio gave the world premiere of Michael Gilbertson’s concerto for trio and orchestra, “Outliers”, commissioned for the group by the Sioux City Symphony Orchestra.

The Trio is also known for its stimulating and varied programming of the entire trio repertoire, and for performances of Beethoven’s complete cycle of works for Piano Trio, which are an ongoing part of its programming. Current programming includes multiple presentations of this complete cycle.

The Weiss Kaplan Stumpf Trio records for Bridge Records which will release Beethoven’s Complete Piano Trios this season. Just released is the premiere recording of Paul Lansky’s Angles (sample the first movement here).  Also on Bridge a 2015 CD project features works by Fred Lerdahl, and a 2014 release entitled “An American Tour” includes world premiere recordings of four new American trios by Lera Auerbach, Chen Yi, Clancy Newman and Paul Schoenfeld. The Trio’s 2011 release of Brahms and Smetana trios has received wide critical acclaim – Fanfare Magazine hailed it as “absolutely one fabulous chamber music recording you cannot afford to be without. . . This may just be the best of the best Brahms B Major Trio recordings.” Previously Bridge also presented the Trio’s recording of Paul Chihara’s trio, “Ain’t No Sunshine”, a work the group commissioned and premiered in 2006 at the Kennedy Center.

The Trio is well known to American radio audiences through nationwide broadcasts on shows such as American Public Media’s Performance Today and WNYC’s SoundCheck. An appearance on St. Paul Sunday has been broadcast nationally several times, and was selected for St. Paul Sunday‘s “Best of the Year” CD.

The Weiss-Kaplan-Stumpf Trio is on the way back to the studio to record the 3rd CD of their complete Beethoven cycle, a pillar for any trio, and particularly in connection with the Beethoven 250th anniversary. In addition to the Beethoven, the trio will record a new work they have commissioned from eminent composer Paul Lansky. Meanwhile, on-stage the trio proves once again how visceral live performances can be with acclaim from 2018 concerts including: “a concert of the highest quality that clearly thrilled the large audience.” “performed to perfection” (Calgary Herald) and “a top-drawer ensemble… strong, engaging and simply superb.” (Virginia Gazette) Among other new engagements, the trio will give two concerts in Cuba in 2019.

New Video Release: Behind the Scenes with the Weiss Kaplan Stumpf Trio
Watch

“Weiss Kaplan Stumpf Trio showcase individual expertise while shining as one” [Headline]
“a concert of the highest quality that clearly thrilled the large audience.” “performed to perfection”
Calgary Herald

“an immensely accomplished ensemble…. This is almost certainly how Brahms wanted and expected his music to be played…”
International Record Review

“When it played Beethoven’s overexposed “Archduke” Trio, every moment felt new. How often does that happen?
Philadelphia Inquirer

Underneath it all? Trust. “We communicate mostly by playing… you’re very sensitive to each other in the moment of performance.”
From an interview with Mark Kaplan in The Tulsa Voice

“All three performers were able to project a strong musical personality while nurturing a fine ensemble sound.”
Classical Sonoma

“a gem of an ensemble. As individuals, the three are distinguished musicians. Together, they’re a team, in the best sense of the word.”
Herald-Times

“The dovetailing of give-and-take among the members…was seamless, and their playing swept up the listener….This performance was delightful in every respect…. With ethereal pianissimos, lockstep ensemble, and heart-felt phrasing, [the trio] gave one of the most completely convincing interpretations of this sprawling jewel [Schubert Piano Trio No. 2 in E-flat] that I have heard.”
Classical Voice North Carolina

“This may just be the best of the best Brahms B-Major Trio performances I’ve yet to hear on disc… this is absolutely one fabulous chamber music recording you cannot afford to be without. Urgently recommended.” Fanfare Magazine

“For those of us raised on the Rubinstein-Heifetz-Feuermann version, this performance will appear a sweet rival, especially given the lush tone each of the participants brings to this romantic score. The vibrant intensity of the music finds bravura expression from this ensemble….” Audiophile Audition

“The pieces share a sweeping Romanticism that the members of the Trio set forth to splendid effect. The Brahms (in the final 1889 version) receives a performance full of warmth and vitality, as does the Smetana trio.” Cleveland Plain Dealer

“[The] group plays the Brahms with great passion, combining moments of virtuosity with a rare concentration in the slow movement…. Their emotional range is very wide, and I was particularly impressed with Weiss’s soft playing in the Adagio and her clean passagework in the finale. A terrific performance, able to stand with the best.” American Record Guide

“they aren’t afraid, collectively or individually, to step up to the plate when a given moment calls for really virtuosic brilliance…one of the finest accounts I’ve ever heard of Bedřich Smetana’s Piano Trio in G minor and the most convincing account ever of Johannes Brahms’ Piano Trio No. 1 in B Major. It all makes for one of the best chamber music CDs you are likely to hear, this or any year.” Phils Reviews

Beethoven Triple Concerto Sioux City Journal
“Peter Stumpf, the cellist, got a beautiful showcase in the Allegro; Mark Kaplan, the violinist, scored in the Rondo and Weiss pulled them and the orchestra together like musical glue.”

Brahms/Smetana CD Review  “…one of the best chamber music CDs you are likely to hear, this or any year.”

Beethoven Piano Trio Cycle – Review #1  “a gem of an ensemble”

Behind the Scenes with the Weiss Kaplan Stumpf Trio – video 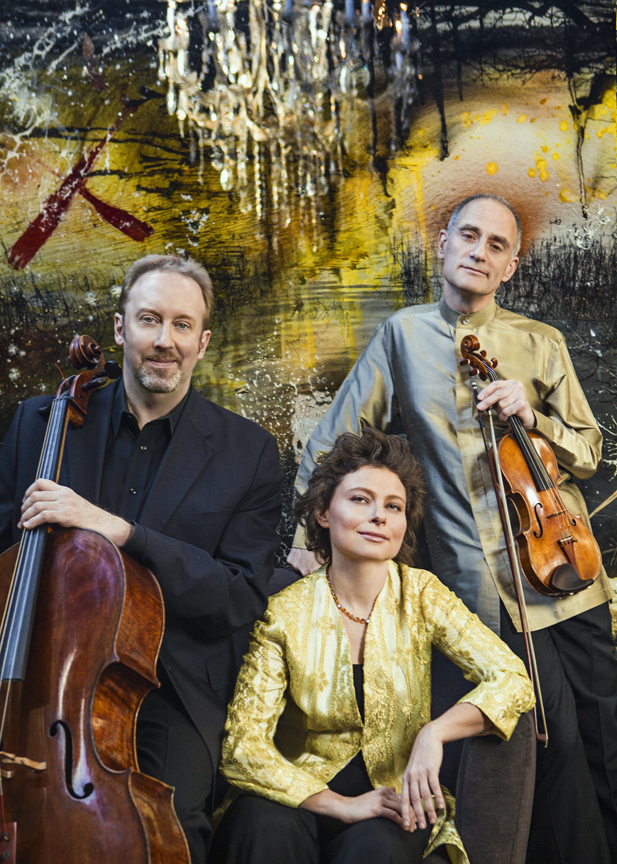 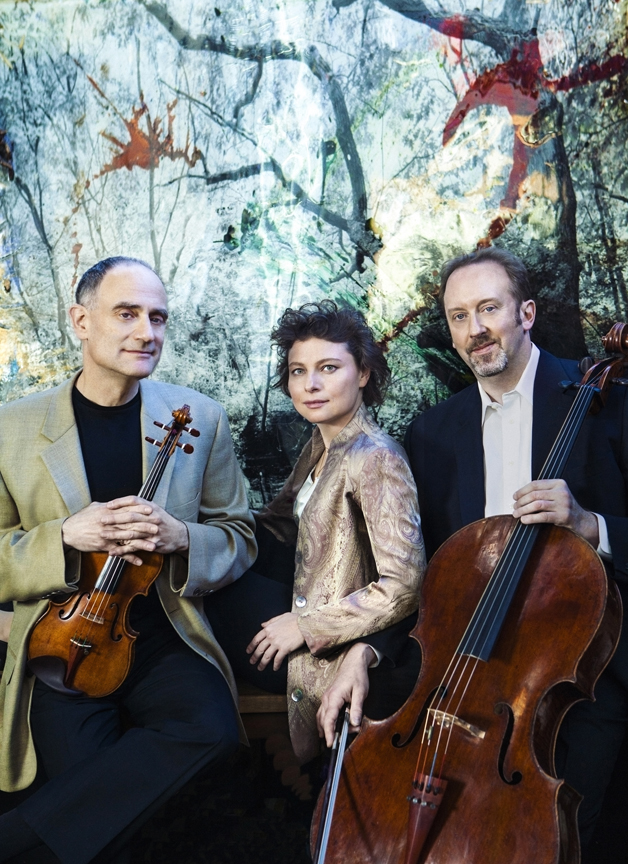 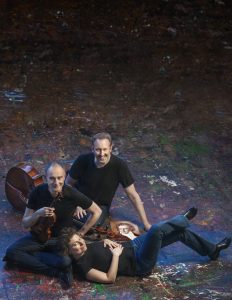